'How I Met Your Mother' recapped by The Charge Live

That was emotional. We can say that at least.
Let's start The Charge at 75% for the finale. Plus 10 for the happy wedding of Barney and Robin. And another plus 15 for building up the excitement on the platform. The Charge is 85% going into the first commercial break. A so-so meta scene with Marshall and Lily brings The Charge down to 80%. Another minus 2 for Ted not moving to Chicago and Lily not calling him a stalker, since it's pretty stalker-ish to stay in a city after one romantic train ride. Also we've all been on the LIRR, and it's not that romantic. Also we know what's coming, so minus 10 for Lily's "not like this. This is different." If it's different ... never mind, we'll get to that later. The Charge is now 68%. "Aren't big weddings kind of a young man's game? You don't have a big wedding in your 30s. If I do ever get married, I'm keeping it simple." Plus 5 for that, Ted. Here's hoping. The Charge is now 73%. The first hints of problems between Barney and Robin show up here. It's really real and raw. Minus 13 for this. The Charge is now 70%. Baby alert! First pregnancy of the (packed) episode -- and it's the mother! Shut up, cynics, plus 17 for this. The Charge is now 77%. Marshall's refusal to say negative things are pretty fun. "Much of what I do does not make me cry." Plus 3 for that. Who hasn't had a job like that? The Charge is now 80%.
Oh, no. Here we go. Robin and Barney. Minus 40. Why did we spend all season building up to their wedding? Their breakup is (sadly) realistic, but why are we seeing it 14 minutes into the episode? A whole season of buildup for immediate unhappiness? And how could they not have told their best friends yet? Minus another 10. The Charge is now 30%.

ruby
@rubyhartland
Robin and barney were the only reason I watched how I met your mother :( and they get divorced :(
Apr. 1, 2014
Baby number 3 for Marshall and Lily. Okay, we'll give back 20 points. The Charge is now 50%. But now they're moving to the suburbs? Minus 10 again. But alright, 3 points back because that rat is all too real. The Charge is now 43%. Here's what Twitter thought of Lily's costume:

Thomas Hesselink
@wickedtwilight
I enjoyed the ending of #HIMYM . Though I wasn't sure what to feel when Lily was in the whale costume crying about Robin leaving...
Mar. 31, 2014

Kate Aurthur
@KateAurthur
What did Alyson Hannigan do to anger the EPs so? That was the worst costume I've seen on television. #HIMYM
Mar. 31, 2014
Ugh the first inkling of Ted and Robin. "The guy I should have ended up with, with the mother of his child." Minus 17. And wtf Barney? You're STILL hitting on women like this? Absolutely no growth? Minus another 13. The Charge is now 23%.

Julie
@tteajjay
Lily crying in a whale costume makes me want to cry so much more 😢 #HIMYM
Apr. 1, 2014

Kelsey Balcaitis
@kelseybalcaitis
It's hard to watch Lily cry when she's wearing that ridiculous whale costume. #himym #HIMYMFinale
Mar. 31, 2014
Seriously? "All of us being young and hanging out at MacLaren's? That part's over." THANKS ROBIN for depressing us. Minus another 13. The Charge is now 10%. Okay this is a good quote. "New rule. Anytime someone talks about something sad, we stay out another hour."

amNewYork
@amNewYork
Good rule. "Anytime someone says something sad, we are staying out another hour" #HIMYMFinale
Mar. 31, 2014
Plus 25 for that, Barney. We all need a rule like that. The Charge is now 35%. "Tonight is about celebrating our friends, nay family ..." Then why isn't Robin here? Minus 7. And now Barney says he is incapable of change. Minus 5. And where the heck is the mother? Is she not allowed to have fun? Minus 7.  Although we'll give 2 back for Stinson "oot" because it looks like he at least learned something from Robin. The Charge is now 18%. Here's a clip of the best of Barney to bring us back to why we love him.
Best of Barney Stinson (How I Met Your Mother) Part 1
by Ankit Kumar via YouTube
Robots vs. Wrestlers! Plus 17. The Charge is now 35%. "You're all the wow factor I need," Ted tells the mother. They are so charming and in love, so why did the ending have to ruin it? Minus 8. The Charge is now 29%. And now Barney is having a baby? Ugh, his reaction. Minus another 12. At least the mother is adorable with her "so where are you guys registered?" line. Plus 5 back. The Charge is now 23%. The first sighting of Ted's children! Plus 7. The Charge is now 30%.  Okay, Marshall and Lily, Robin is not going to be at the birth of Barney's baby, stop being ridiculous. Minus 5. And "Number 31," really, Barney? Minus 7. The Charge is now 18%. Ok, fine, Barney's speech to his newborn daughter is moving. Plus 25 back. The Charge is now 43%.

Best TV Show Quotes
@QuotesShow
"You are the love of my life. Everything I have and everything I am is yours. Forever." -Barney Stinson (How I Met Your Mother)
Apr. 1, 2014

Liyana Hanim
@LiyanaHanim
I can’t believe that out of all of the characters in How I Met Your Mother..Barney’s scene made me cry in the finale!😭
Apr. 1, 2014
Ted re-proposing is so charming. "After only seven years and two kids." Aw, a modern family! Plus 17.  But minus 6 for making us continue to fall in love with the mother. Barney is now old. As hilarious as it to watch, it's also depressing. Minus 7. We're all taken shots in the middle of the day, stop with the judging. Ugh, shut up old man Barney, you're the one hanging out a bar too in the middle of the day. Also, doesn't it seem like kind of a bitter pill to swallow that he never wanted kids and now he has one and is delighted, but Robin still can't have them? No points either way, but it leaves a really bad taste in our mouths. The Charge is now 47%.

amNewYork
@amNewYork
"Shots? Before lunch on a Thursday? Are you trying ... to make bad decisions?" #HIMYMFinale
Mar. 31, 2014
So. Robin is here. Yay? Her ex-boyfriend who she apparently is still hung up on is getting married? And her ex-husband is in the wedding? Why is Robin so happy that her ex-husband is happy? No points on this because we don't know how we feel. Robin RSVP'd no?! Minus 11. Oh, aw, Marshall. Old man Marshall is better than old man Barney. Who would have guessed? Plus 5. But no way would MacLaren's still be open. Minus 7. But why isn't it in Central Park? With all the callbacks to the pilot, they could have remembered that one. Minus 3 for that. Why isn't Marshall a judge officiating? Minus 4. And Lily is the maid of honor? Minus 2. Where are all the mother's friends? Is the gang really a cult? That would actually be kind of realistic, given how fast they warmed to Robin. Plus 20 back for that possibility. BRB our cold, bitter hearts are melting and we need some tissues. The Charge is now 47%.

Brittany Dubos
@Bdubs_3
Ted's reaction to seeing the Mother in her wedding dress>>😍🙊 #TooCute #HIMYMFinale
Mar. 31, 2014
Aw, here we go. The reason we watched the entire series. "Aunt Lily wasn't wrong. It was at times a long and difficult road. But I'm glad it was long and difficult. Because if it hadn't gone through hell to get there, the lesson might not have been as clear. You see kids, right from the moment I met your mom, I knew I have to love this woman as much as I can for as long as I can and I can never stop loving her, not even for a second. I carried that lesson with me through every stupid fight we had, every 5 am Christmas morning, every sleepy Sunday morning. Through every speedbump, through every pang of jealousy or boredom, or uncertainty that came our way, I carried that lesson with me. And I carried it with me when she got sick. Even then, in what could only be called the worst of times, all I could do is thank God. Thank any god there is or ever was or ever will be and the whole universe and anyone I could possibly thank. I saw that beautiful girl on that girl on that train platform, and I had the guts to stand up, walk over to her, tap her on the shoulder, open my mouth, and speak." Dear lord, there aren't enough tissues in the world right now. Plus 40 for this. The Charge is now 87%.
This scene of them meeting is adorable. All the callbacks! True love and fate! Even in tragedy. Plus 8. The Charge is 95%. Show's over, right? Shut it down. Be over, be over! Oh, no. Here we go. The finale scene shot way back in 2005. First of all, no kids are this okay with their father dating. Minus 20, no matter how long ago their mother died or how cool their parents are. Plus 3 for them at least calling out that their mom is "hardly in the story." This is so uncool. We apologize to the memory of the mother, since apparently true love is just a plot device so Ted can end up with Robin. Minus another 25. This email to The Charge sums it all up: 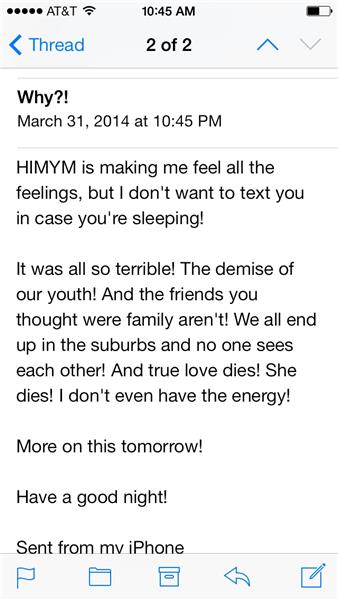 Minus another 10 for even making us think about these things. And minus another 7 because video buzzers into apartments are creepy, Robin. All right, fine, the old, young pictures from the pilot are nice. We'll give you that 7 back. The Charge ends the episode at 43%. Some of your thoughts from Twitter:

GreySea
@GreySeaArt
@amNewYork Horrible.The ending completely took away from the build up & love of "the mother".Shouldve been called " Obssessed w Aunt Robin"
Mar. 31, 2014

Ariel Álvarez
@arielalvarez88
@amNewYork best ending ever... EVEEER!
Mar. 31, 2014
Let The Charge know if you agree with our finale grade of 43%.